He served as associate pastor at St. John Cathedral, Boise (1987-90). In 1990, he was commissioned an Army Chaplain with rank of first lieutenant and began service in the Idaho National Guard as Battalion Chaplain, 1-148 FA, in Pocatello.

In 2004, he was called to active duty for Operation Iraqi Freedom III, at the rank of major. He served as Brigade Chaplain, 116 HCBC, in Kirkuk, Iraq, and was awarded the Bronze Star Medal and Combat Action Badge for his service.

Upon his return to Idaho in 2005, he served as administrator and then pastor at St. Bernard’s, Blackfoot, and St. Kateri Tekakwitha, Fort Hall. In July 2009, he began a year-long sabbatical for advanced strategic studies and attended the Inter-American Defense College, Fort McNair, Washington, DC, from which he holds a Certificate, Hemispheric Defense and Security.

With the rank of colonel, he has served the Idaho National Guard as the Joint Forces Command Senior Supervisory Chaplain since 2008.

He served as pastor for Holy Spirit, Pocatello, which includes St. Anthony’s and St. Joseph’s, and St. Paul’s, Chubbuck (2010-15).

Other Interests/Activities: Avid Hunter and Fisherman 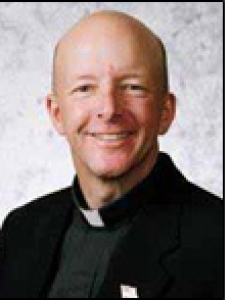