Browsing What the Faith

Angel of God,  my guardian dear. To whom God’s love commits me here.

Ever this day be at my side, to light, to guard, to rule and guide.

The prayer to your guardian angel was taught to me by my father when I was a child. It was one of the litany of prayers we said every night before bed.  To this day, I still pray for my guardian angel to be with me.  And he or she is!

Several years ago (almost 17), I was moving home to Idaho from Dallas, TX. The job for which I had relocated had ended and I felt it was time to come back.  My dad flew down and was driving back with me.  We had everything I owned packed into a U-Haul and were towing my car (also packed).  It was a long drive and when we got tired, we would find a place to pull off the road and take a little nap.  They were not long naps, just “power naps” so we wouldn’t doze off while driving.  One of our stops was off the highway in a pretty little pull out area.  We had pulled over, getting out of the way of any other traffic that may have wanted to use the area, and were settling in to close our eyes for a few minutes.  Glancing in the mirrors, we watched another car pull in behind us.  Something in the way the car pulled up, the way some men got out and how they were walking around and up both sides of our truck made us realize they were not there to take a nap with us.  Needless to say, we were scared. Our guts were telling us they were up to no good and we were in DANGER!  Every single suspense/crime/horror movie I had ever seen or book I had ever read was flooding my brain.  My “flight or fight” instinct was kicking in and I was heading to a full-on panic.

All of a sudden, out of nowhere, and I really mean nowhere, as we were able to see quite a ways down the road, there appeared a sheriff’s cruiser. The cruiser was directly behind the car the men got out of.  The men saw the sheriff and nonchalantly got back into their car and drove off.  The sheriff drove off behind them.  Nothing was ever said by the sheriff or the men, nor were we ever even acknowledged.

And then we were alone again. Dad and I looked at each other and started driving as we no longer needed a nap, and went over what happened. To both of us, the sheriff really did just appear (even though we may have been so focused on the men in the car behind us we didn’t notice him/her pull up).  Regardless of how the sheriff got there, we are convinced it was either our guardian angels sent to protect us, or even Saint Michael the Archangel himself arriving to do battle for us.

This is just one of so many other stories from people who have had experiences with angels. The angels are God’s army.  They are here to protect us, to pray for us, to guide us and defend us.  They are in every shape and size.  Sometimes they are recognized, most times they are not.  From that day, instead of thanking my lucky stars when something goes great, I thank the angels.

Saint Michael the Archangel. Defend us in Battle.  Be our safeguard against the wickedness and snares of the devil.  May God rebuke him, we humbly pray.   And do thou, oh prince of the Heavenly Host, by the power of God, thrust into hell Satan and all evil spirits who prowl about the world seeking the ruin of souls.   Amen! 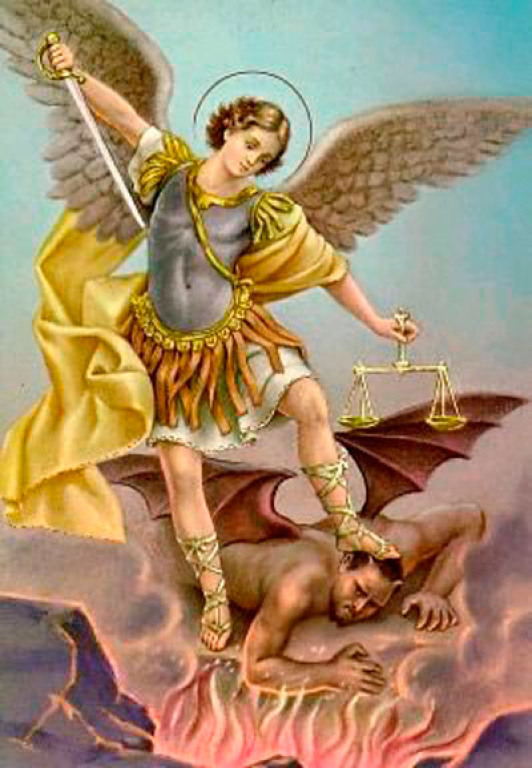 There are no comments yet - be the first one to comment: